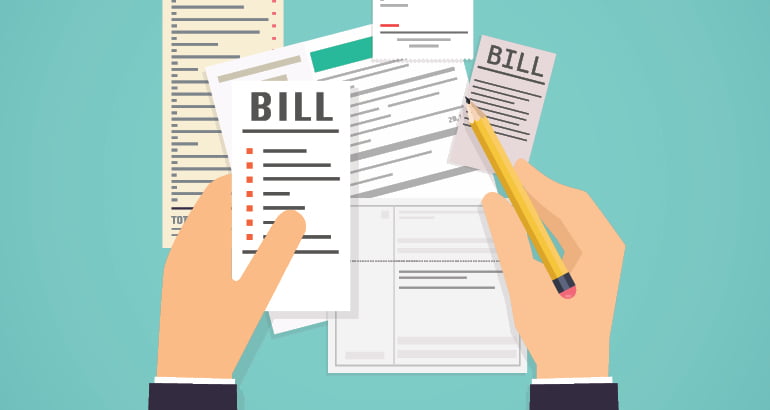 So you want to pay off your debt. That’s a great goal! But if you can barely make payments on your monthly bills, what are you supposed to do?

First, don’t think there’s no hope. The process of getting current on your bills and becoming debt-free is simple — but that doesn’t mean it’s easy.

To get on the financial path you want to be on, you have to commit. Here’s how to get started.

How to Start Paying Off Debt, Even if You’re Behind on Your Bills

We’ve got seven steps for paying off debt when you’re behind on bills. Go through them in order. Some steps may take you longer than others, but trust that each step is important, and complete each one fully before you moving on to the next.

1. Find Out Whom You Owe… and How Much You Owe Them

Prioritize your catch-up list by ordering bills and creditors by importance… and annoyingness.

If you’re behind on utilities or rent, catch up on those first. Then list your bills from highest to lowest interest rate. If you’re trying to maintain your credit score, prioritize debts that aren’t yet in collections over those that are.

From there, if you’ve got one company calling you multiple times per day, you can move that debt higher on your list than a debt you owe to a company that’s relatively quiet. Alternatively, if there’s a debt that just nags at you personally, move it up the list to get rid of it ASAP.

Make sure to exclude time-barred debts. Those are debts outside the statute of limitations, meaning they’re too old for a company to sue you over.

Now it’s time to fit your debt into your budget and get a realistic picture of how long it’s going to take to catch up. When you’re on a low income or behind on your bills, or your income varies from month to month, we recommend doing a zero-based budget.

A zero-based budget puts all your expenses in order of priority. Your necessities are your top priority, and your debts or catch-up payments get prioritized over wants. You’ll “spend” every shilling of each paycheck on whatever is in your budget.

If you’re new to budgeting, try splitting your month into two separate budgets — one for each paycheck.

The envelope system is a great complement to a zero-based budget. It helps limit your spending in areas that are triggers for you, because you’ll only carry the cash you’ve budgeted for in each category.

3. Cut Up the Credit Cards

At this point, if you have multiple credit cards, let them go. You know what’s coming in and what needs to go out. You know if you have enough income to cover an expense or if you’re coming up short.

Your budget should only include what you can afford based on your income, not your available credit.

If you need to keep one, choose the one with the lowest interest rate, and keep it at home so you’re not tempted to use it.

You don’t need to close your credit card accounts to stop using them. But if closing the account is the only way you’ll stop using them, that’s better than continuing to rack up debt. Yes, your credit score will drop temporarily, but a good credit score is useless without a sound financial foundation. Do whatever it takes to stop your debt from going up while you’re getting current.

You may think little cuts here and there are enough to make up for your spending vices, but when you’re trying to accomplish a big financial goal, you need to make big changes. And that includes saying no to things you previously said you’d never give up.

Remember: This isn’t forever. You’re ripping off a Band-Aid to heal a wound that’s been festering for a long time. Eventually, you’ll be in a place where you can indulge again. But that day is not today.

To stick to your budget, it’s imperative that you track your spending. But automatic tracking through apps like Mint is not enough when you’re trying to lower your expenses

and pay your delinquent bills.

Just as counting calories or macros on a diet tends to make you eat less, manually tracking every dollar you spend results in you spending less.

Organizing your budget and lowering your spending are just the first steps. You’ll need to earn more money than you were bringing in when you got into this situation.

Deliver pizzas, drive for Uber, clean houses, do work-from-home customer support — anything that’s flexible enough to let you maintain your full-time job and that pays more than minimum wage, i.e., you’ll need to do more than just online surveys.

Organize your schedule to make time for increasing your income. Again, it’s not easy, but it’s not forever.

Once you’re current with your payments and you’ve created room in your budget to remain current (and have extra), you’re ready to begin tackling debt. And the good news? You already know how!

Keep following these steps, and you’ll remain current while you continue on the path toward of freedom from debt.